Can someone explain what a locale is meant to do in OpenGuides - what sort of area is it meant to cover. Specifically I have seen a couple of entries with Locale = "Southwark" that I don't consider to be within Southwark. I assume that it is not meant to cover the London Borough of that name.

If something's down as being in Southwark but you know Southwark well and you disagree, then you're probably right and the locale was added by someone who doesn't know the area very well - sort of the "South of the river is all the same place" syndrome.

The locales system is a method of identifying two things:

It's designed to cope with the fact that locales are fuzzy things, and hard to precisely pin down. 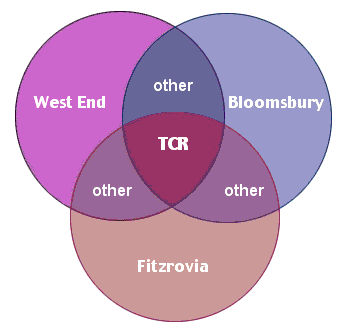 The Locales field is exactly analogous to the Categories field - the only difference lies in the meaning. Apart from that, the two operate in exactly the same manner. By entering a locale name into the Locales field, you indicate that the page you're viewing is located in that locale. Simple. Any number of locales may be put into the field, as locales tend to overlap, meaning that a place may well be in several places at once. For example, at left is a Venn diagram of Tottenham Court Road. TCR exists simultaneously in the locales West End, Bloomsbury and Fitzrovia. Other things may exist in one, two or also all three of those locales. Or none at all (in the case of pages that are not about places).

There is also a hierarchy of locales, which is very straightforward. Locale Bloomsbury is part of Locale Central London. Other locales may be in Locale West London, Locale East London, and so on. These meta-locales are themselves in Category Locales, as are all locale pages.

Let's take a moment to clarify the notion of "locale". For example, Brick Lane. What is Brick Lane? Well, it's a road. But it also gives its name to a surrounding district. So Brick Lane the road is in Brick Lane the locale - that is to say, the Brick Lane page has "Brick Lane" entered in its Locales field (but it's in Category Roads). Making fine distinctions like this allows us to increase the granularity of the information on the site, and make things easier to find.