This is the locale that refers to London as a whole. 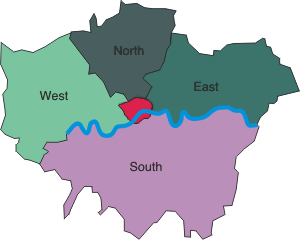 It in turn is divided into North London, South London, East London, West London and Central London. The more distal parts of the city are referred to as Outer London (not shown above, but imagine a zone running around the inside of the outer edge of the map).

The River Thames divides the city into its northern and southern halves.

For detailed discussion on the history, size and nature of the city, see London.