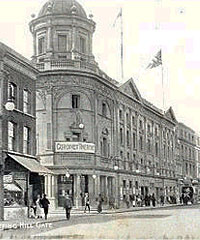 One of Notting Hill's three excellent cinemas, along with the Gate Cinema and the Electric Cinema. The Coronet was built in 1898 as a theatre, but has been used as a cinema since 1916. It's a beautiful Edwardian building with two tiers, the stalls at ground level and the balcony above. Until very recently, the Coronet was the only cinema in London, and possibly in the entire country, where you could smoke (in the balcony). However, this policy has been rescinded for a trial period, and probably will not return.

The cinema is reputedly haunted by the ghost of a female cashier who was caught fiddling the box office receipts by the manager, who then dashed out of his office, ran upstairs and threw herself from the balcony.