Government sponsored attraction for the Year 2000 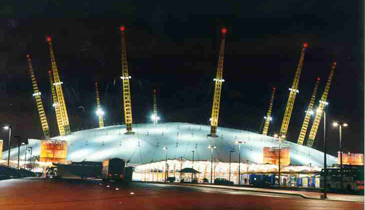 An �800m white elephant, built to celebrate the year 2000, that costs the taxpayer �21m a year to maintain empty and unused. Designed, unsurprisingly enough, by Richard Rogers. It currently occasionally serves as a venue for events, and also featured at the beginning of a recent "James Bond" film. Worth the money, obviously! The Dome's future is uncertain, but the rumour is that it may become a business park for technology companies.

The Dome suffered from heavy criticism, often from people trying to get at the Labour Party, but many people who did visit it whilst it was open enjoyed it.