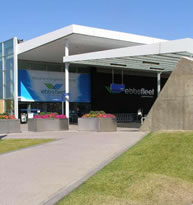 The UK's only true high-speed line, the Channel Tunnel Rail Link (CTRL), is under construction between the Tunnel and St. Pancras in London. Phase 1 from the Tunnel to Fawksham in Kent is already complete, shaving 15 mins off journey times for Eurostar trains from Waterloo to Paris and Brussels.

The more important phase, however, is the current Phase 2, under construction between Ebbsfleet in Kent, and St. Pancras. It includes a new parkway station at Ebbsfleet (which is just off the A2 and not far from the M25), the massive Stratford International station at the Stratford transport hub in east London, and finally an impressive extension to the existing St. Pancras Midland station, which will be the new St. Pancras International.

Construction includes a tunnel under the Thames Estuary and a long tunnel across East London to York Way just north of King's Cross (completed in January 2004).

Of particular interest to Kent commuters will be the Domestic services (CTRL-DS). These will provide trains from existing lines in Kent including towns such as Canterbury, Folkestone, the Medway Towns, Ashford and Maidstone, running onto the new high speed link at Ebbsfleet. This will slash journey times into London as trains will run at over 170mph on the CTRL; Ebbsfleet is expected be particularly busy as it will be just 15 minutes from St. Pancras, and there will be massive demand from both park-and-ride commuters, and from the large new housing development planned for the area.

The CTRL would also be important for the Olympics should they come to London; the main Olympic site would be Stratford, with a shuttle provided between there and King's Cross taking just 7 minutes.